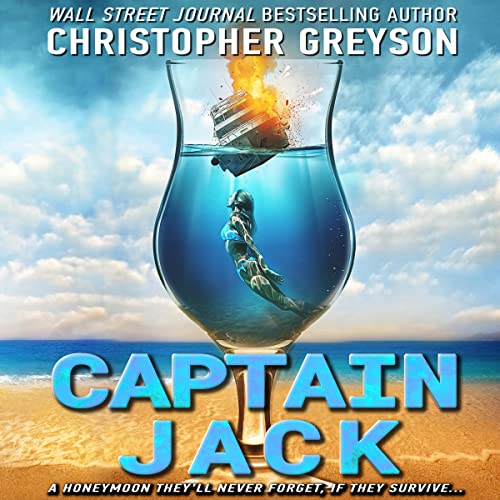 This will be a honeymoon they never forget, if they survive….

Looking forward to some fun in the surf and sand, newlyweds Jack and Alice Stratton are determined not to let something like a hurricane upset their honeymoon plans. But the storm’s winds and churning tides unearthed a secret long hidden beneath the turquoise waters of the island paradise.

A tour boat captain discovers a lost submarine and offers to sell its location to a man known only as the Dyab – the Devil. When the captain is murdered, the police suspect Jack and Alice and confiscate their passports. Trapped between the Devil and the deep blue sea, the handsome young detective and his blushing bride have nowhere to turn and everything to lose as they set out to prove their innocence and find the real killer….

Captain Jack is a riveting thriller that takes murder mysteries to a whole other level. Filled with action, intrigue and suspense, this book delivers compelling twists and crafty schemes along with some laugh-out-loud honeymoon antics.

Captain Jack is part of the Detective Jack Stratton Mystery-Thriller Series, which has over 20,000 five-star reviews and one million readers and counting. If you love a pause-resisting action-adventure novel with mystery, humor, and a dash of romance, pick up Captain Jack today!