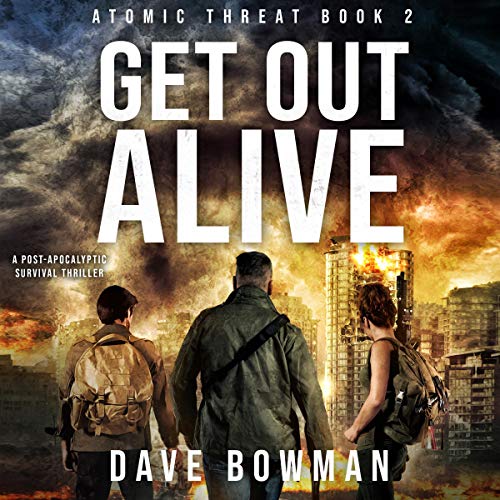 It’s been two days since the world ended…and things are getting worse.

Jack, Naomi, and Brent ran for cover after a nuclear bomb hit Los Angeles. But nowhere is safe for long, and with their hiding place compromised, they’ll have to face the outside world if they want to stay alive.

Society has collapsed. Thanks to the EMP, most vehicles aren’t running, the cities are in shambles, and soon, food and water will be scarce. Traveling on foot is suicide, but Jack’s wife is 1,400 miles away in Texas. And he’s determined to find her.

Annie has her own problems. Austin, Texas, has been destroyed, and the only person she can trust is her best friend Charlotte. Not even Annie’s home is safe from pillaging.

Five desperate survivors. Two cities. One husband and wife hoping to be reunited in the ashes of society. They’ve made it two days past of the end of the world. Can they survive what comes next?

Get Out Alive is Book two in Atomic Threat, a post-apocalyptic thriller series about ordinary people fighting to survive the end of the world as we know it.