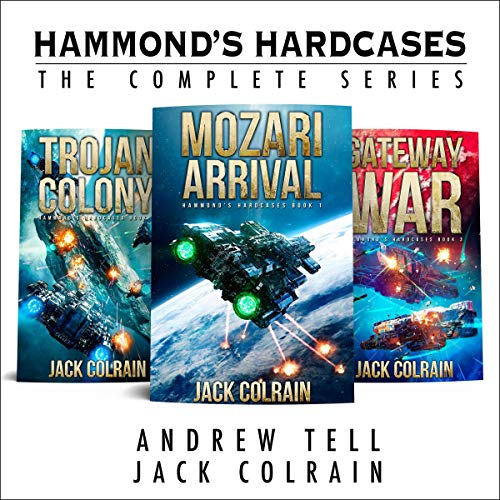 They brought death and destruction to Earth. Now it’s time to return the favor.

The massive Mozari spaceship struck without warning. In an instant, major cities were leveled. Millions were wiped from the face of the Earth. The horrifying message to those remaining – your training starts now.

Pods scattered across the globe are filled with strange alien wares, and scientists of all backgrounds must come together to harness the advanced technology in a race to discover its secrets before the one year deadline. And before their experiments with the exo suits kill another soldier.

Few possess the rare antibodies needed to control the Mozari armor. But Daniel West soon discovers he’s one of the civilians selected to be fitted and trained to use the suit.

Instead of following in his family’s footsteps, he joins the military and is assigned to a team on a mission to the Mozari ship. But when tragedy strikes his team, he must take command of a mission into enemy territory that promises nothing less than certain death.

What they discover on the ship changes everything.

The ends justify the means – except when humanity’s survival is on the line.

Earth’s landscape lies scorched by weapons fired after the most recent round of alien attacks. The technology the Mozari left behind has advanced scientific understanding at breakneck speeds, giving humanity the chance to fight back against their Gresian foes.

Space-worthy vessels and all-new weaponry are pumped out of orbiting factories, boarded by the brightest minds to begin colonizing new planets. But humanity is still vulnerable.

Lieutenant Daniel West understands this, which is why his recruits are the most highly trained the military puts out, regardless of the physical and mental demand it takes to make them that way. Any soldier in the newly created Special Warfare Task Force must plan and prepare for every possible scenario.

After all, the return of the Gresians isn’t just inevitable. It’s imminent.

Now assigned to the United Earth Ship Shenzhen, Daniel is chosen to command a platoon to protect a team of elite colonists traveling to LTT-8270. But it isn’t until their arrival that the true mission becomes evident, and Daniel discovers an even more horrifying truth.

A truth that demands too high a cost for humanity’s future.

Humanity can’t win. Lieutenant Daniel West and his soldiers will never overcome the crushing odds of a direct assault against superior alien forces. Every simulation test they’ve run ends the same way – in death. But they have no other choice. The only option is to destroy the Gresians forever or face Earth being overrun by alien forces.

Good thing Daniel has no problem eradicating an enemy that shows no mercy. He won’t risk standing by and allowing the Gresians to enslave those he loves. So, when orders come down, he’s ready to take the war straight to the enemy’s home turf.

But the Gresian’s planetary defense systems destroy half their platoon before they can even land on the alien world, and when a counterattack is launched against Earth, the support ships are forced to pull back from Gresian space – leaving the team stranded, with orders to finish the mission. By any means necessary.

In the end, there’ll be only one way to give his team a slim chance at survival and restore hope for humanity’s future.

But it will require Daniel to make the toughest choice of all.