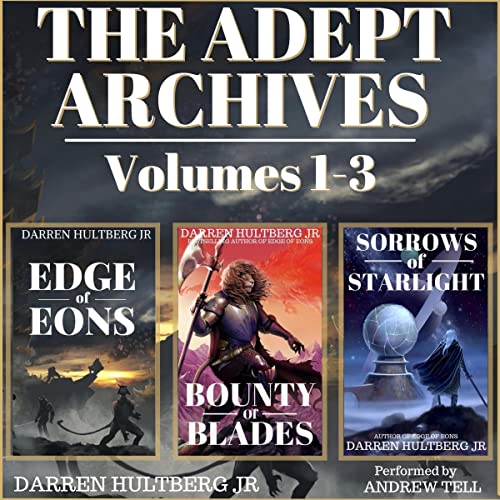 This volume contains the first three novels in the Adept Archives series: Edge of Eons, Bounty of Blades, and Sorrows of Starlight.

In daylight, the realm is ruled by the adepts, a group of mighty cultivators who use their spirits to wield world-bending, mystic power. These adepts live in constant strife, fighting for control of relics that hold the divine powers of ancient gods.

In twilight, the realm belongs to the darkbeasts, nightmarish creatures born of a mysterious fog known as the veil. These creatures are drawn to power, hoarding relics in their dungeons and slaying any adepts that dare venture too close.

Together, these opposing forces create a grim balance of power, one only survived by those with strength, cunning, and a bit of wit. But balance is not easily maintained….

Dark forces work from the shadows, putting events into motion that will drive the realm into chaos. Soon, portals begin to open, drawing warriors from other realms to test their mettle on Eon’s battlegrounds. Many perish before reaching their true potential, falling victim to the realm’s many perils. However, the cosmos is a vast sea of souls, and one police officer from earth may prove he has the fighting spirit needed to shake Eon to its very core….