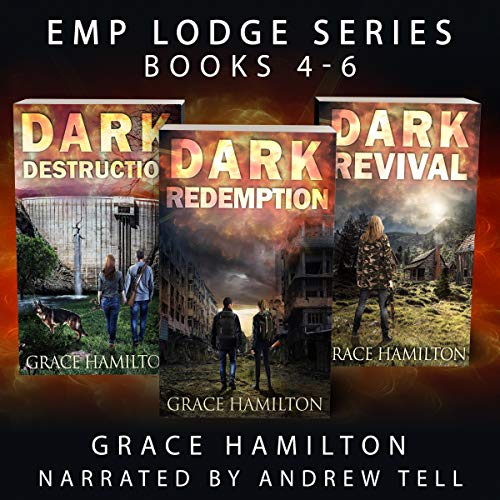 In this new dark world, responsibility for others is a heavy burden.

Megan Wolford is used to handling her own problems, so being part of a makeshift family, and all the responsibilities that come with it, is a new experience. She’ll do anything to help protect her newfound love Wyatt and the lodge group, but sometimes events are out of her control….

When a leak in a nearby dam threatens to flood the land they’ve fought so hard to keep, Megan and her group will have to make a difficult choice to stay or leave. Stopping the flood will require all their resourcefulness, prepper ingenuity, and effort – but leaving it will mean the blood lost protecting it was for nothing.

As Wyatt reveals the true hidden value of the lodge, they’ll be forced to dig in and build a set of flood defenses to divert the incoming torrent. But with the leak growing larger everyday, the survival of the group is anything but guaranteed, and little do they know, a force more malevolent than Mother Nature is behind the deteriorating dam….

In a brutal world, sometimes forgiving yourself is the hardest part of survival….

Megan Wolford knows surviving this new post-EMP world means facing ever-changing threats. It has been months since Wyatt’s brother Jack was killed, and his newborn son shows signs of an illness no one at the lodge can cure. Megan blames herself for Jack’s death, so when the opportunity to help his son, Jack Jr., arrives in the form of a wounded US soldier guarding a mysterious box, she’ll do anything to redeem herself. The soldier is desperate to deliver the package to the National Recovery Unit, and Megan agrees to take on the mission in exchange for medical care for Jack Jr.

There’s just one problem: Mark Doyle, a ruthless former special ops soldier who would rather die than see the world return to what it.

When lives are at stake, you can’t always rely on others. There are some things you have to do yourself.

Rushing back from the NRU, Megan, Wyatt, and their party arrive to find anything but a warm welcome. Their home has been compromised by rogue soldier Neil Spraggat and a small army of men who are using the lodge as a base for a deadly operation. To make matters worse, during the takeover of the lodge, Megan’s daughter Caitlin and Wyatt’s mother Rosie were forced to hide in the root cellar to avoid capture.

The remaining members of the lodge reconvene at an old hunting cabin to hatch a rescue plan, knowing time is of the essence. With limited resources and manpower, they must face a highly trained, elite military force.

With the lives of her beloved daughter and newfound family hanging in the balance, Megan will only be able to rely on herself as the final step in America’s demise begins.