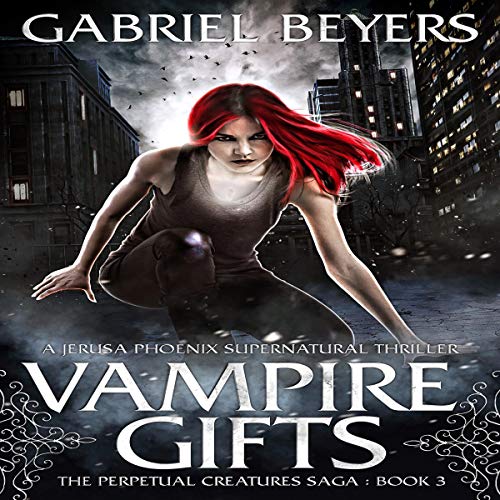 A savage army. A friend in chains. Can one vampire prevent an endless war?

Jerusa Phoenix hungers for blood, but her ghost won’t let her feed. Starved and powerful, she’s forced to choose between chasing after flesh-feasting savages or going behind enemy lines to save her imprisoned friend. After a ruthless battle to protect some innocent humans, she encounters three vampire women who make her a deadly proposition.

With her allies attempting to stave off the endless flow of flesh-eaters, Jerusa may just have to sacrifice her friend to battle evil. As powerful enemies close in from all sides, can Jerusa pull off the impossible, or will her actions trigger an all-out vampire war?

Vampire Gifts is the third book in The Perpetual Creatures Saga, an action-packed series of paranormal suspense. If you like non-stop adventure, unique magic, and a big cast of heroes, then you’ll love Gabriel Beyers’ spellbinding novel.